This project was devised by XR Psychologists, who took stories about conception, pregnancy and birth and transformed them so that they read as if a new era is being conceived and nurtured, rather than a human baby. I presented some of my texts on Infertility for this project which were translated accordingly, The resulting stories may stir in the reader the possibility of articulating similarly intense emotions about the necessary scale of change (hope, fear, loss, fragility, joy, possibility) that can often seem impossible to describe and totally overwhelming.. 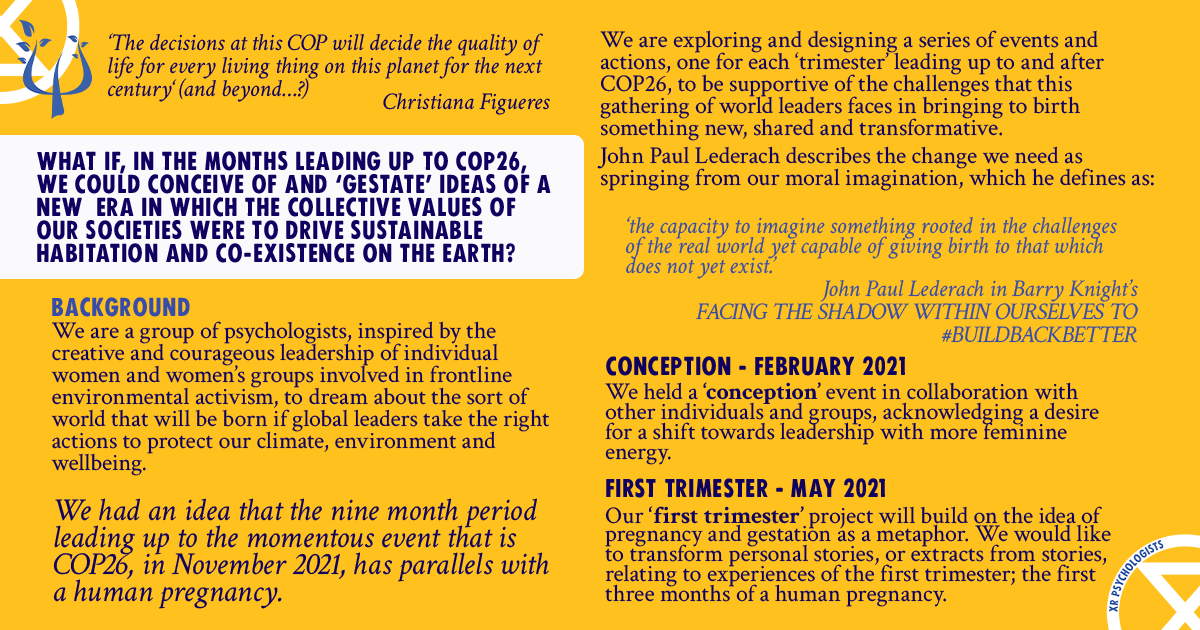 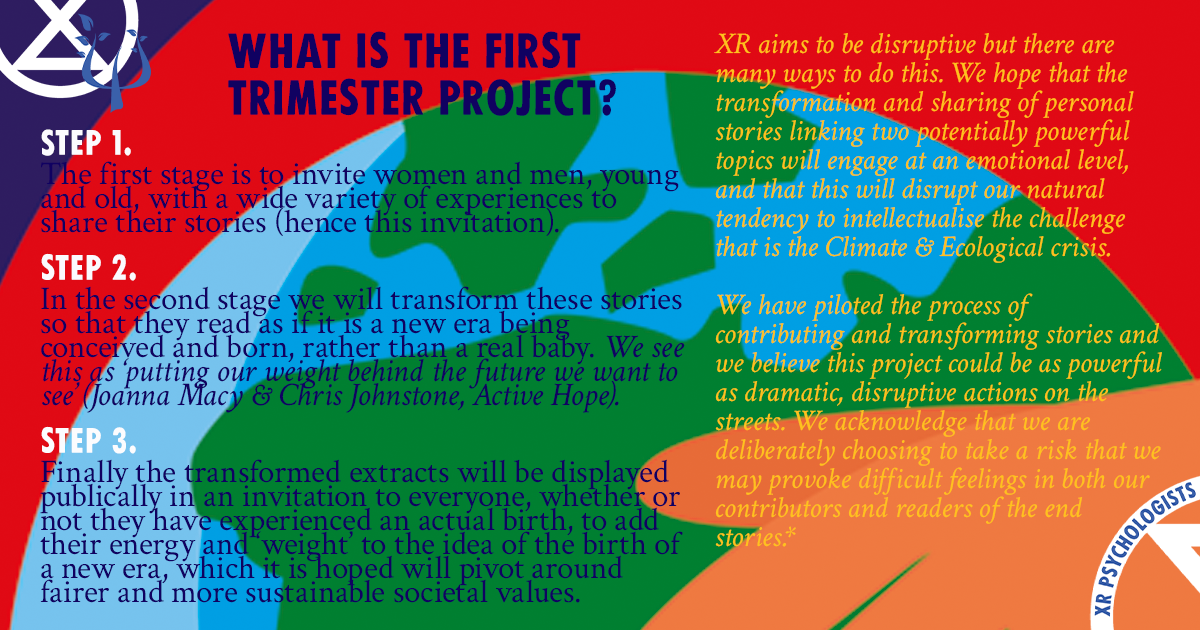 THE CLOCK IS TICKING 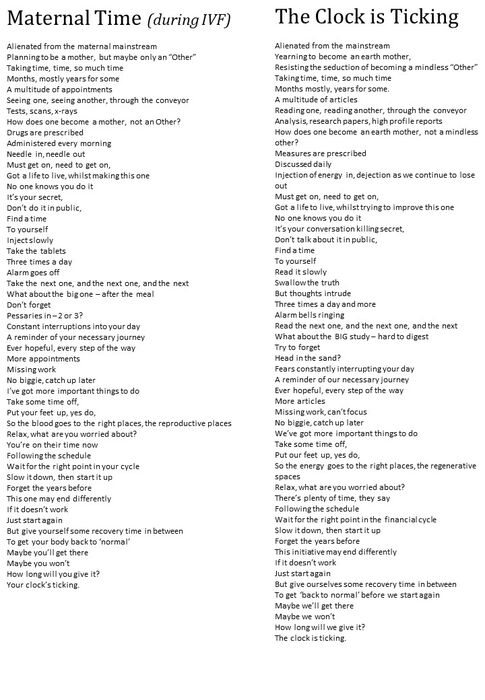 Alienated from the mainstream
Yearning to become an earth mother,
Resisting the seduction of becoming a mindless “Other”
Taking time, time, so much time
Months mostly, years for some.

A multitude of articles
Reading one, reading another, through the conveyor
Analysis, research papers, high profile reports
How does one become an earth mother, not a mindless other?

Measures are prescribed
Discussed daily
Injection of energy in, dejection as we continue to lose out
Must get on, need to get on,
Got a life to live, whilst trying to improve this one.

No one knows you do it
It’s your conversation killing secret,
Don’t talk about it in public,
Find a time
To yourself
Read it slowly
Swallow the truth.

Fears constantly interrupting your day
A reminder of our necessary journey
Ever hopeful, every step of the way
More articles
Missing work, can’t focus
No biggie, catch up later
We’ve got more important things to do.

Take some time off,
Put our feet up, yes do,
So the energy goes to the right places, the regenerative spaces
Relax, what are you worried about?
There’s plenty of time, they say.

Following the schedule
Wait for the right point in the financial cycle
Slow it down, then start it up
Forget the years before
This initiative may end differently.

If it doesn’t work
Just start again
But give ourselves some recovery time in between
To get ‘back to normal’ before we start again.

Maybe we’ll get there
Maybe we won’t
How long will we give it?
The clock is ticking.

WHAT WE YEARN FOR Me and my body have gone through the experience of arrest four times now; certainly less than some, but more than most people will go through to fight for social change. I had started to take it in my stride, but writing it down, you realise what you’ve gone through. When it got a bit tough, I had to remind myself I am physically healthy, at least, for now. Although it is a disease: our failure to grasp the severity of the crisis should officially be registered as a disease, after all it is literally life threatening. But I reassured myself we in the global north aren’t dying yet (well, mostly) and to get a grip.

Your body goes through a lot. I’m tired, but I’m so lucky this movement exists and I’m so lucky to be privileged enough to take the risk. For me the support and assistance I received, however invasive the arrest process, far outweighed the bodily discomfort. Without this, I’m not sure I would be able to make my voice heard and the thought of that is hard to take.

I’ve just started to believe a new era is possible and I’m weaning myself off all my dread. I’ve felt more sick this time round, physically drained and frequently nauseous. I am older of course; not only officially senior for a protester, but now in a high-guilt state because of my more mature years.

With all the dread I was feeling I began to question if we really could cultivate new social values and bring them to fruition, or it was just the fear making my mind feel this way. They don’t really know what eco anxiety is anyway; a rational response or a mental health condition?

I thought I was just in an artificial dread-fuelled sickness blur for months, with my phone vibrating three times a day to remind me to read more crisis related news, take in more, take in more, and perhaps my inner resources were actually empty, but being told to keep pretending everything is all ok.

But the news is also showing there is something new emerging, wriggling and kicking away, wanting to be birthed. I feel like we’re reaching an official milestone: when the majority start to realise how amazing society could be, even if they need to believe social change will happen “naturally.” But we’re getting there, eventually, in our own way. Just the rest to get through now. Well done humans. These pieces conceive of Maternal Space through the convergence of infertility in women and infertility in our ecological environment in the 21st century, drawing on the exploitation of the production of natural resources and the manipulation (albeit willingly) of the female body in relation to (re)production. 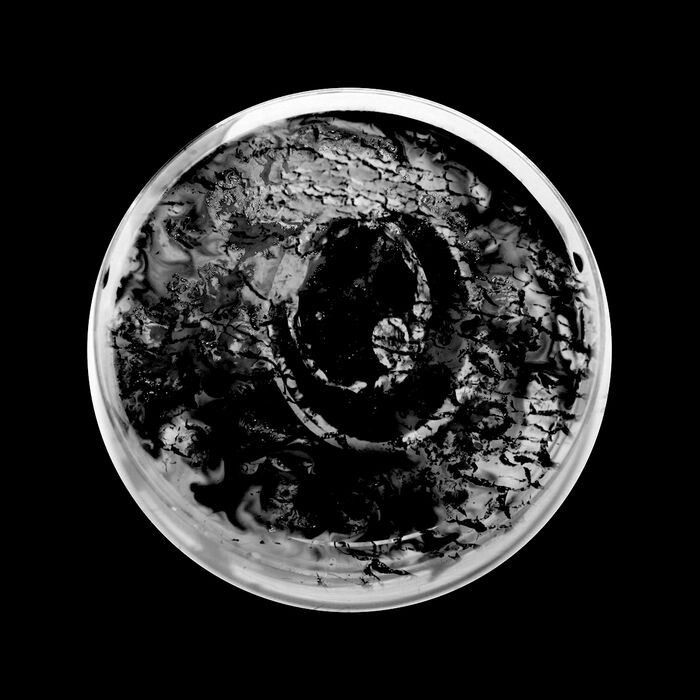 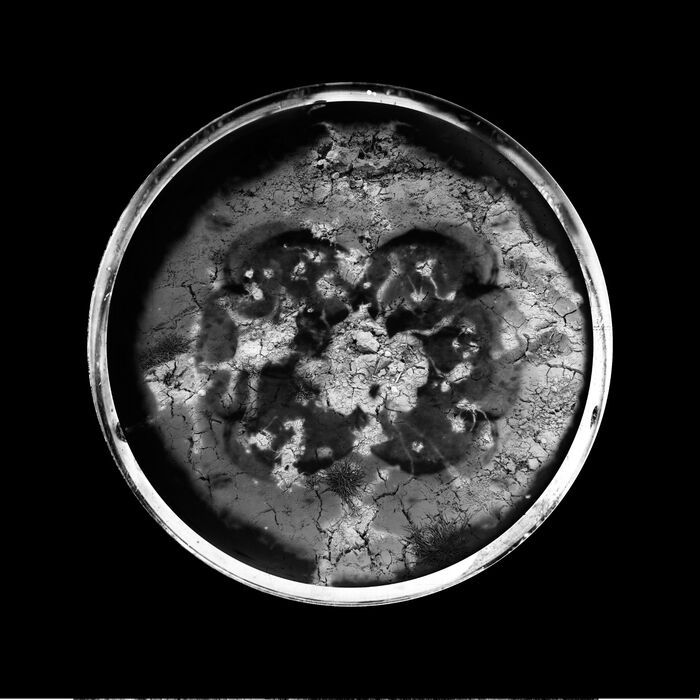 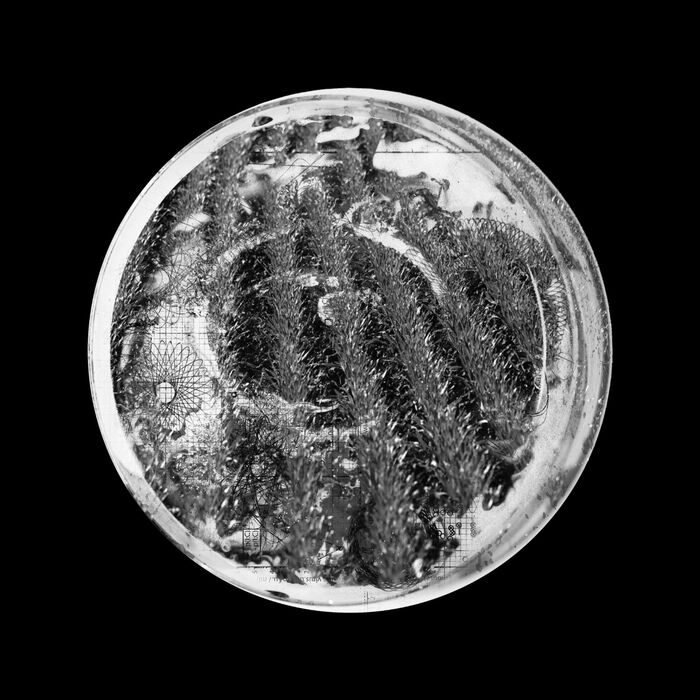 This work reflects on the exhaustion of the natural environment and the natural female body within 21st century lifestyles, both ‘resorting’ to artificial methods of reproduction to sustain themselves. The images attempt to draw visual parallels between these two infertile spaces as artificial germination of crops lie alongside IVF hormone cultivated embryos, both incubated outside their natural habitats to ensure optimum productions levels. 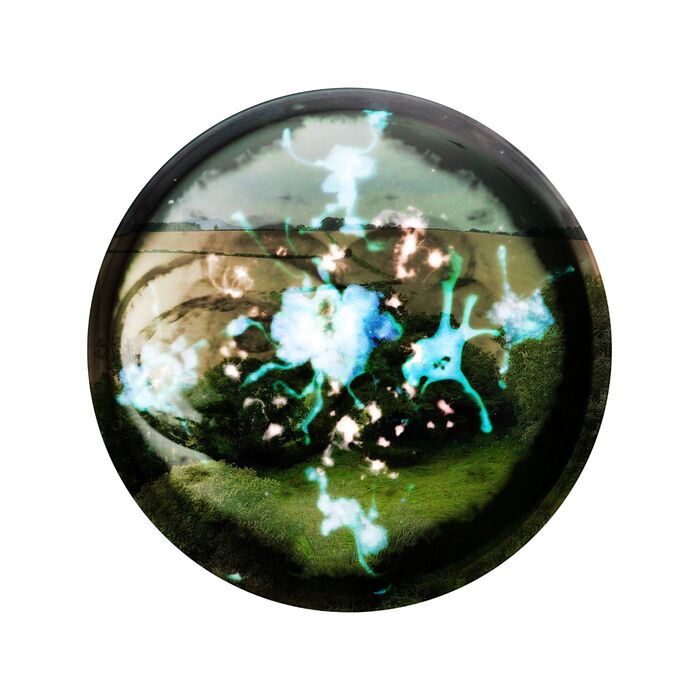 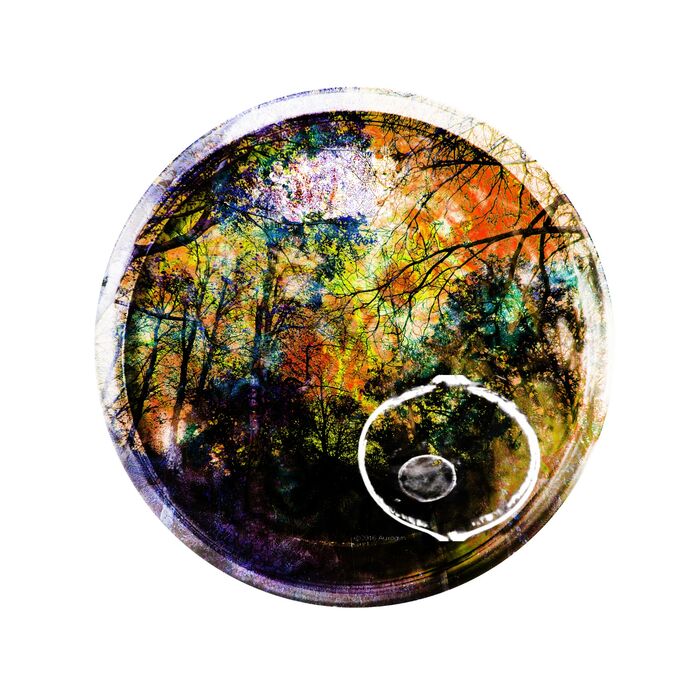 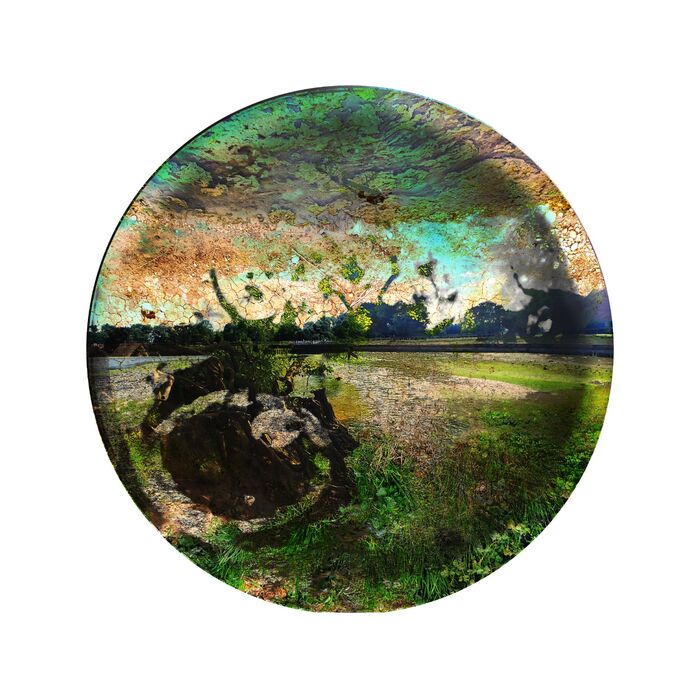 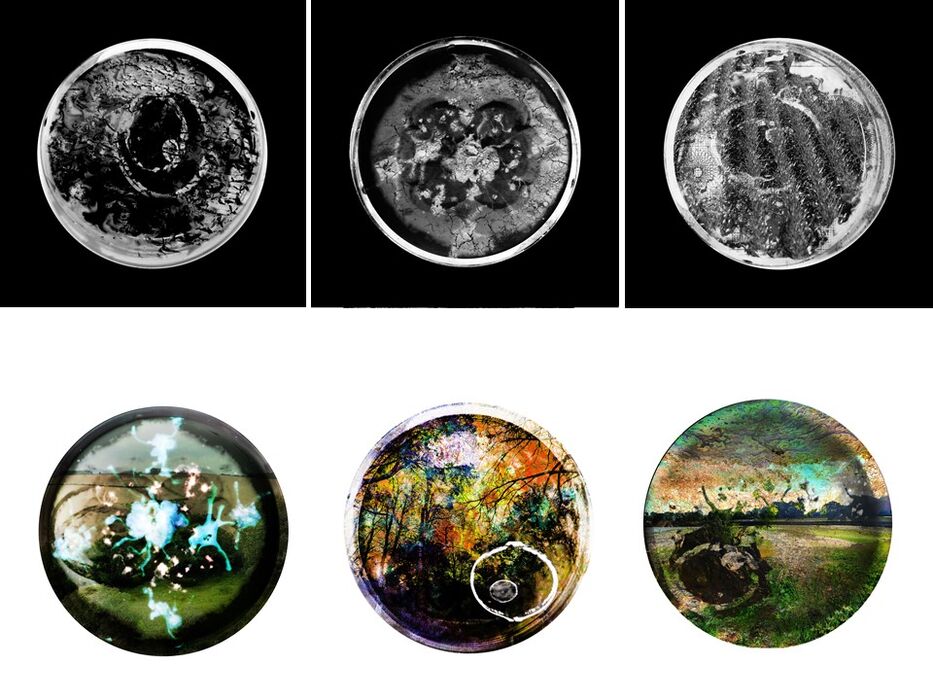