Away with the Quarrelsome (Pomegranate) Apple in "Stay In Art" magazine

Away with the quarrelsome (pomegranate) apple
Words by Giulia Isetti 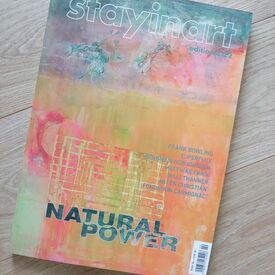 More than any other fruit, the pomegranate stands as a dubious symbol of femininity and the virtues, values, and attributions associated with it. For centuries, female figures in art and literature held the pomegranate in their hands. Time to get rid of it. Aphrodite, Demeter, Hestia and Hera: stayinart Edition 2022 is dedicated to the Greek goddesses. If we look at the iconography of the women mentioned, a few things can be concluded. For art can be not only a mirror but also a cradle for society, and as such it not infrequently embodies characteristics of coming eras in addition to feelings, mentalities and historical events of its period of origin. One element that is particularly striking, for example, is the fact that three of these goddesses are frequently associated with the pomegranate.


THE MANY MEANINGS OF THE MALUM GRANATUM
The pomegranate is associated with wealth, abundance and fertility in various cultures, from China to India, the Middle East to the Mediterranean. This is due to the fact that the fruit forms so many seeds - malum granatum in Latin means nothing more than apple with seeds. Interestingly, the pomegranate is also believed to have contraceptive and abortifacient properties. But let's get back to our goddesses: legend has it that Aphrodite, the goddess of love, had this "sacred" fruit tree planted on Cyprus as a gift to mankind. The pomegranate is also associated with Hera, the goddess of marriage and fertility, who often holds a pomegranate in iconography. Even more prominent is the link with Demeter, the goddess of harvest and agriculture. Athenians* ate pomegranate seeds at festivals celebrated in her honor to ask for fertility and prosperity. This tradition is traced back to the myth of Persephone, the daughter of Demeter, who was abducted by Hades to the underworld. There she had also eaten of pomegranate seeds and was henceforth torn between the worlds. 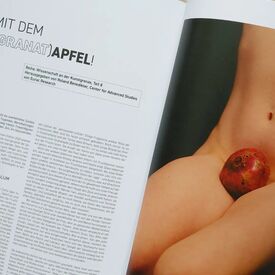 In this myth, the pomegranate represents death and rebirth into a new life: Namely, during the months that Persephone stays on earth with her mother, nature awakens and fills with life. On the other hand, in those months that she spends with her husband in the underworld, the trees shed their leaves and the world freezes in winter cold, which explains 1the cycle of the seasons. Some fragments of ancient rites of the classical world have been preserved until today: It is still the custom in Greece and Turkey, for example, for young brides to throw a pomegranate to the ground at their wedding to see how many seeds fall from the fruit. The number of seeds is supposed to indicate how many children the couple will have. Not all ancient goddesses are associated with fertility, however, as is evident with Athena, Artemis, and Hestia, for example. These goddesses are even portrayed in antithesis to fertility: For example, when Niobe boasted of having numerous offspring, Leto sent her only children Artemis - the virgin goddess of the hunt - and Apollo to kill Niobe's children. Athena is also a virgin, which in Greek means parthenos. For this reason, the temple dedicated to her on the Acropolis is also called the Parthenon. Athena was not born of a woman, but sprang directly from the head of Zeus and both Artemis and Athena severely punished those men who managed to see her naked. Thus Aktaion was mauled by dogs and Teiresias was blinded. And finally there is Hestia, the goddess of the domestic hearth, also a virgin, as her priestesses, called vestals in ancient Rome, had to be.


We remain in the classical world, but turn from the fine arts to literature. In this metier, the poet Semonides excelled in a rather dubious manner from today's point of view. In his famous satire on women, the so-called Weiberiambos, he speaks of ten categories of women. Each of them he compares to an animal. Already the choice of the animals, namely mare, sow, monkey or bitch, suggest an unflattering picture. Of the ten categories, only one gets off reasonably lightly: namely the bee, which takes care of the domestic hearth and the offspring. So, if art and literature are the mirror of society, this gives rise to the image that for centuries women were perceived as positive only in connection with motherhood and chastity - the best was a combination of both. 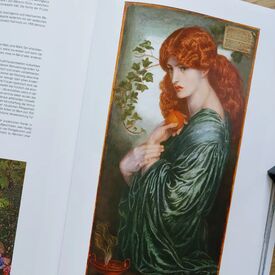 The Catholic Church finally managed to bring together these two contrasting images, which form a very obvious oxymoron - chastity and motherhood - in the figure of the Madonna, the virgin mother. Many religious paintings depict the Madonna with a pomegranate - for example, the Madonna Dreyfus and the Madonne della melagrana by Fra Angelico, Filippo Lippi, Sandro Botticelli, Jacopo della Quercia and Hans Holbein. The pomegranate is also a symbol of the martyrdom of Jesus and in Christian iconography, besides fertility and abundance, it represents faith and the unity of different peoples and cultures. For this reason, the fruit can also be attributed to a man, although more rarely. This is what happens in the case of the portrait of Emperor Maximilian I by Albrecht Dürer, in which the emperor holds a pomegranate as a symbol of unity and cohesion. The seeds of the fruit represent the subjects, the "children" of the emperor. From the Renaissance onward, women liberate themselves from representation as superior and idealized beings - as goddesses, Madonnas, or saints - although the pomegranate continues to be associated with female iconography, as the cases of Felice Casorati and Salvador Dalì demonstrate as late as 1900.


THE FRUIT OF INCOMPATIBILITY
Today, at least in much of the Western world, motherhood is a choice: easier access to contraception allows women to have children if they want, when they want, and to seek fulfilment in roles beyond motherhood, such as in work or other activities. But what happens when this newfound freedom collides with a cultural heritage that goes back thousands of years? According to recent studies, among the various motivations for women to want children, that of social pressure stands out, the desire to conform to a predefined model of domestic happiness. Even some people still think that a childless woman is "against nature", even selfish, something that few would say about a childless man. But the opposite theory, that those women who want children are selfish, is also becoming more common. Lund University in Sweden recently calculated the enormous environmental cost - 58.6 tons of carbon dioxide per year - of having even one child in the Western world. For many young people, therefore, bringing a child into the world is seen as an act of selfishness, whether because of the resulting pollution, depletion of resources, or the resulting exacerbation of poverty and inequality1. In addition, women too often bear the brunt of domestic care work: it is estimated that women worldwide perform $10.8 trillion worth of unpaid work each year, a fact that certainly does not invite the additional responsibility of childbearing and childrearing. Women who nevertheless seek to become pregnant face an additional hurdle: In Westernized society, motherhood is usually postponed, often resulting in greater difficulty conceiving and a higher risk of miscarriage and fetal malformations. According to some studies, women, unlike men, are more likely to suffer from childlessness, which in turn manifests itself in the form of social isolation, depression, feelings of guilt2, stress3, and a reduction in quality of life. Like the issue of fertility, the issue of infertility resonates primarily in the female setting. The lack of success in procreation is predominantly attributed to women, although for years it has been statistically proven that the "responsibility" for this, if you will, lies in equal parts with both partners*.

DARE NEW INTERPRETATIONS OF OLD SYMBOLS
The society of our time no longer knows any shades of grey: everything is black or white. But who says that everything has to be polarised One's own decision regarding fertility, often made involuntarily, is not automatically criticism of the decisions of others. In Germany4 and other Western countries, one in five women has no children. A number which has enough consistency to attract little more attention. Our society needs to be educated to look at these women (and men) without judgment and prejudice and to understand that it is a basic right to be able to decide whether or not to have children and that this decision is only made between women and their partners. Art can and should contribute to creating new narratives. Initiatives such as Franziska Burkhardt's photo series, which re-contextualizes the use of the pomegranate, are to be welcomed and aim to show that being a woman is not necessarily synonymous with motherhood. Similarly, the recently opened exhibition "You are not wonderful just because you are a Mother" sheds light on less traditional aspects of motherhood, such as difficulty conceiving, abortion, and the weight of judgment from strangers. For in essence, as Berthold Brecht aptly put it, art is "not a mirror that stands up to society, but a hammer with which to shape it."

Link to original article:
Away with the quarrelsome (pomegranate) apple"